Moon In The Mirror 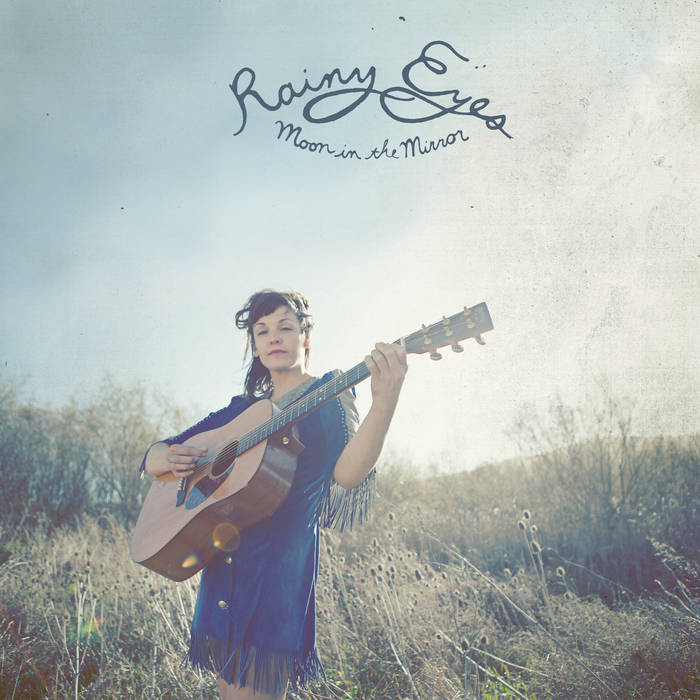 Rainy Eyes (Irena Eide) is a Norwegian-born Americana singer-songwriter residing in the small hippie-surf town of Bolinas, CA. For the past decade she has been living in the San Francisco Bay Area; writing music, performing and touring throughout the US.

Rainy Eyes’ debut album release, “Moon in the Mirror” is a long-awaited, carefully crafted collection of 8 original compositions by Irena Eide (Rainy Eyes); two of them co-written with Grammy-award winning Peter Rowan (‘Bill Monroe & the Bluegrass Boys’, ‘Old And In The Way’. Peter can also be heard singing harmonies on one of the tracks.


Recorded at the scenic ‘Panoramic Studios’ in Stinson Beach, California, overlooking the Pacific Ocean, on a hillside rich in musical history; inhabited by Jerry Garcia, Grateful Dead, Peter Rowan, David Grisman and more back in the 70’s, the session
featured and also was produced by the amazing Seattle-based multi-instrumentalist; Eli West on acoustic and electric guitar, banjo and harmonies and Bay Area bluegrass-queen Amy Scher on fiddle and harmonies, as well as the talented Danny Vitali on bass for the title track. Filled with magic and good vibes the recordings were engineered and mixed by Robert Cheek and Scott McDougal, and mastered by Sweden-based mastering engineer Eric Broyhill.

Most of the album was recorded back in 2016 and added onto in 2018 with the last two tracks, and after it’s long fermenting process it is finally released into the world this Summer on August 2, 2019! Available on vinyl and cd, as well as downloads and streamable on Spotify, iTunes and the rest.

Despite its melodic tones, the songs on Rainy Eyes’ all-original debut record, Moon in the Mirror are steeped in painful life experiences but also manifested through unfathomable strength and hope.
Most of ‘Moon In The Mirror’ was written during the winter of 2015 while Rainy (Irena Eide) was living in a trailer in the Inverness woods with her then one-year old boy, trying to piece her life back together after a volatile break-up.


The songs reflect on how bad and out of hand things had gotten in their relationship, and through songwriting she was able to process and heal.

There is a deep sense of hope and new beginnings on the album, and there is a theme of taking back your independence and freedom and not letting someone else own you or control you. As the song ‘ Moon In The Mirror’ sums up in the second verse; ‘Well I took the keys and away I run, in my barefoot feet towards the setting sun, and I’m traveling with the moon in the mirror’.

The title ‘Moon In The Mirror’; an homage to one of Rainy Eyes’ biggest songwriting influences; ‘Gillian Welch’, is actually a line from Gillian’s song ‘I Dream A Highway’, and much to that same sentiment, the first song on the A side, an original, old-time sounding fiddle and banjo tune called ‘Dreamed About You’ starts off the album on a light and summery note, with Irena on vocals and guitar, Eli West on banjo and Amy Scher on fiddle and harmonies. It’s an upbeat and uplifting song about finding real, true love, with ethereal metaphors and dream-like imagery.

The second song on the album is ‘Falling Star’, the first of two co-writes on the album with bluegrass-legend Peter Rowan. The first line ‘Some people go to church, some people go to bars, and some spiral downwards, like a falling star’ immediately pulls the listeners back down to earth. Like a true country/bluegrass song, (although the song is not bluegrass per say) it speaks honesty, but perhaps less literal and specific, which is true for most of Rainy Eyes’ song writing. She tends to keep her lyrics more vague and open to interpretation. The song still has an underlying story; of lost souls, and how low someone can fall, and finding that guardian angel who pulls you out of the darkness; to the listener her songs are relatable and full of imagery and natural motif.

The title track and single on the album ‘Moon In The Mirror’, is another country-inspired tune, but this one is the first to hint to the more rock-influenced side of Rainy Eyes’ songwriting. The song is about longing for home; to feeling safe and protected again, and about how we’re all born with an innate wisdom and as we grow up we start doubting ourselves and fearing death. In the song, home is no particular place, but more finding home within your soul, which is an ongoing theme on this album as well. Maybe that is ‘God’, or just the stillness and peace within you.

The fourth song on the album is the last on A side of the vinyl, the anthemic song ‘Living The Dream’ has almost a cajun feel with electric guitar and fiddle.
‘The Other Side’, is the first song on the B side with acoustic guitars, fiddle and harmonies, then ‘To Live And Learn’, featuring Peter Rowan on harmonies. Both songs are about reckoning with the past, how our decisions in life and the choices we’ve made are what got us in the place we’re in now; and how we sometimes must learn from our mistakes the hard way. These two country-inspired tunes are followed by the last two songs on the album ‘Here Right Now’, and the warm and lo-fi indie folk rock love song ‘Love You Tonight’, featuring Irena on all instruments, including drums, organ and electric guitar.
This album was her way of dealing with her own grief and pain, and these two tracks give you a more personal and intimate feel and a closeness with the artist, hinting to a more rock-indie influence, and perhaps a little forewarning to the more full-band sound to come on the next album. Rainy Eyes will be in the studio recording the next album this Summer, with an all-star team of musicians so stay tuned for album number two hopefully out in 2020!

All songs by Irena Eide

Bandcamp Daily  your guide to the world of Bandcamp

outré black metal, with a Victory Over the Sun interview and music from Liturgy and Jute Gyte.